Difference between revisions of "BMW 7 Series"

The BMW 7 Series is a line of full-size luxury vehicles produced by the German automaker BMW. Introduced in 1977, it is BMW's flagship car and is only available as a sedan.

There have been five generations of the 7 Series: 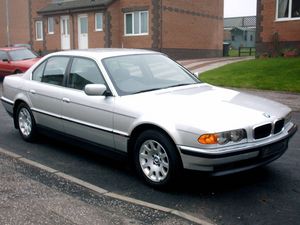 The E65/E66/E67/E68 7 Series featured BMW's first of a kind iDrive system, consisting of a video screen in the dashboard and a controller mounted on the center console that is used in a similar way to a computer mouse. Using a system of eight menus, most of the car's climate, audio, navigation, suspension and communication settings are controlled via iDrive. However, the system has been criticized by many automotive writers as being too complex and not intuitive enough.

"Active" Seat continuous passive motion technology was made standard equipment on the 750/760 models and included in the Luxury Seating Package with heated and ventilated seats for driver and front passenger on the 745 models.

The car was available in thirteen variants[1]—of those, 11 are now in production and on sale in Europe, with five available in the U.S. since diesel models are not available there. 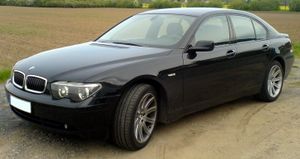 The 7 Series was facelifted for 2006 with a restyled front and rear and a larger range of engines, the N62B48.

The twice-refreshed 7 Series sports a new taillight and reduced height for the trunk lid. The front headlight and the kidney grille was also raised somewhat, as well as a new front air dam and fog light assembly.

*0–62 mph
**All roadgoing BMWs have an electronically limited top speed of 250 km/h (155 mph). This limitation does not however apply to the GCC specification models.

In 2007 the 7 series received minor updates both inside and out. On the exterior, new wheel designs were made available and power folding mirrors became standard. On the inside, an update to the iDrive system (but still no RTTI: Real Time Traffic Info) was also made standard. 2007 also saw the installation of an auxiliary input for connecting an audio source. Engine options remained the same as with the 2006 model, but the short wheelbase 760i, was no longer available for the North American market.

BMW plans to offer a car that runs on both petrol and hydrogen, to be called the Hydrogen 7. Drivers will be able to switch what fuel they are using with the push of a button. [3] However, only 100 units have been built up to now for a limited edition. For example, the mayor of Munich, Christian Ude, received one of them.

An all-aluminum 3.0-liter straight-six cylinder diesel engine produces 245 hp (183 kW; 248 PS). The peak torque figure of Template:Convert/Nm comes in at 1,750 rpm up through 3,000 rpm. Its 194g/km emission figure is class-leading for conventionally powered luxury cars, as is its 38.7 mpg

The new F01/F02 is equipped with a more intuitive iDrive system with a full featured web browser.[4] Video this will be safer, and more technologically advanced as well as rich in entertainment.

BMW has developed a parking-assist technology that can automatically park the car while the driver stands outside and watch as the internal robotics park it using a combination of sensors. A prototype of the system has been completed and a demo video was recorded using a BMW 730i.