BMW M GmbH (previously: BMW Motorsport GmbH) is a subsidiary of German car manufacturer BMW AG. Established in May 1972 with just eight employees, it grew to 400 employees by 1988. BMW M, also known as M-Technik or just "M" (for Motorsport) was initially created to facilitate BMW’s racing program, which was very successful in the 1960s and 1970s. The first racing project was BMW’s 3.0 CSL; in the late 1970s the first modified street legal road cars were produced for the contracted racecar drivers as their personal vehicles. Also, BMW M supplied the 6.1 liter V-12 engine that powers the McLaren F1, which, like its engine supplier and manufacturer, has enjoyed plenty of racing success, famously winning the 24 Hours of Le Mans in 1995, the first year of competition for the GTR racing variant. 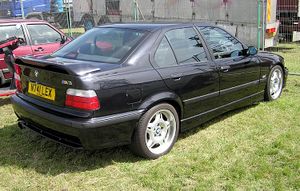 After the success of BMW M in racing venues and the growing market for high performance sports cars, M introduced cars for sale to the public. The very first M-badged car for sale to the public was the M1, revealed at the Paris Motor Show in 1978. The M1, however, was more of a racecar in domestic trim than an everyday driver. The direction of the M cars changed with the 1979 release of the M535i, which was a high performance version of BMW’s popular 5 Series mid-size sedan. Since 1978, BMW M has offered modified versions of nearly every car on BMW’s production line, excluding the 7 Series and X Series sport utility vehicles. To this day BMW M continues to produce some of the most highly tuned street legal cars available in full production. BMW M offers modified engines, suspension, interior trim, aerodynamics and exterior styling. The objective of BMW M is to sell factory production sports cars that are comfortable enough for everyday use while offering uncompromised driving satisfaction and performance.

Mercedes-AMG and (Audi) quattro GmbH offer special versions of many vehicles in their parent company's range, in a similar way to BMW M. Audi's RS models are often reviewed in direct competition to a similarly-sized BMW M car, such as the Audi RS4 vs BMW M3[1][2].

BMW M also faces competition from several independent companies offering their own performance versions of BMW models; some performance packs can be retrofitted to existing cars while others are applied to new cars bought directly from BMW AG and converted prior to first registration. Such companies include Hamann Motorsport, Alpina, Dinan Cars, AC Schnitzer and Hartge.

For example, the E28 M535i featured suspension, styling, and transmission improvements over the standard 535i. These changes were carried out by BMW Motorsport, thus the car carried "M" stripe badges on the front grille and boot, but not the full "M5" nomenclature. The E28 M5 was sold alongside the M535i.

In recent years, M badges have been used to accent non-M factory options. Examples of this include the E46 3 series, in which the sport package option upgraded the car to include M68 style rims which had small M badges below the BMW Roundels. In other instances, M styling without the badges has trickled down into non-M cars as factory options. For example, both the E39 and E60 5 series sedans had optional aerodynamic packages that included strongly influenced M5 styling (for example bumpers). It is not unusual to see "standard" BMW's with "M" badges or ribbons accenting the design.