Difference between revisions of "BMW VI"

The BMW VI was a water-cooled V-12 aircraft engine built in Germany in the 1920s. It was one of the most important German aero engines in the years leading up to World War II

The first twelve-cylinder engine built by the Bayerische Motorenwerke AG, with a 60-degree included angle between the cylinder banks. The BMW VI was developed from the BMW IV by doubling the number of cylinders. Series production commenced in 1926 after type approval had been granted. From 1930 on, after 1000 engines of the BMW VI type had already been delivered, Germany was again permitted to construct military aircraft. The sudden additional demand resulted in the production figures increasing rapidly. In 1933 the BMW VI was used for BMW's first experiments with direct fuel injection.

The BMW VI was the chosen source of power for numerous record-breaking and long-distance flights, including the first east-to-west crossing of the Atlantic in 1930 by Wolfgang von Gronau in an open Dornier Wal flying boat powered by two BMW VI engines.

The BMW VI was put to unusual use as a power unit for the "Rail Zeppelin" high-speed railcar. Many versions of the BMW VI engine were developed, and it was built under license in Japan and the Soviet Union. This was further evidence of the reliability of an engine with which BMW made a fundamental contribution to the build-up of German air transport. At least 9,200 built between 1926 and 1938. The engine was license-built in the Soviet Union under the supervision of Mikulin, who then further developed it as the M-17. 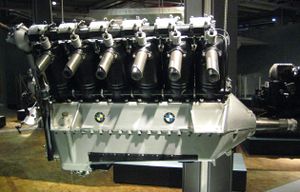 Side view of the BMW VI

This aircraft engine article is missing some (or all) of its specifications. If you have a source, you can help Wikipedia by adding them.
Retrieved from "https://www.bmw-tech.org/w/index.php?title=BMW_VI&oldid=3576"
Categories: