Difference between revisions of "BMW in motorsport" 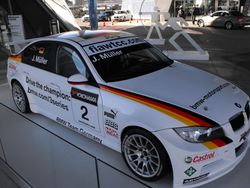 Throughout its history, BMW cars and motorcycles have been successful in a range of motorsport activities. Mainly before WW2, BMW motorcycles were winning e.g. at the Isle of Man TT. Apart from the factory efforts, many privateer teams enter BMW road cars in Touring car racing. BMW also entered cars or provided engines in Formula One, Formula Two and sportscar racing. BMW is currently active in Formula One and World Touring Car Championship (WTCC).

An outstanding role played the 1500cc BMW M10 engine block. The four cylinder started with modest 75hp in 1961, became successful in touring cars, developed over 300hp in 1970s Formula 2, and at the ripe age of a quarter century, produced almost twenty-fold its original power in the 1986 turbocharged BMW M12/13/1. As the base of the BMW S14 engine of the original BMW M3, it collected many more wins.

Mainly before WW2, BMW motorcycles were winning e.g. at the Isle of Man TT in 1939. BMW-powered sidecars won the World championship many times until the 1970s.

In the 1930s, BMW pilots were successful with the BMW 328 two litre sports car, winning many races including the prestigious Mille Miglia — a class win in 1938 and the outright winner (with a streamlined body on a shortened course) in 1940 with Huschke von Hanstein. It also won the RAC Rally in 1939 and came in fifth overall (first in its class) in the 1939 24 Hours of Le Mans. In fact, the BMW 328, proved unbeatable in international sportscar races in the two-liter class.

Since the pre-war BMW 328 model, BMW had a reputation for sporty production cars. The expensive V8-powered BMW 503 and BMW 507 of the 1950s could not add much to this reputation, unlike the small motorcycle-engine powered BMW 700 which e.g. was driven by Hans Stuck to German championships in hillclimbing.

Since the 1962 introduction of the BMW New Class in 1961, BMW has become one of the most successful marques in Touring car racing. The original 1500cc 4-cylinder BMW M10 engine block was modified to a four valve design which won championships in Formula 2. Equipped with a turbocharger, the version BMW M12/13 even won the 1983 Formula One championship.

In the 1970s, BMW M GmbH was formed to support the racing efforts. This led to the development of the BMW M1 and in the 1980s to the BMW M3. Having won more road races than any other model in history, the E30 M3 is considered by many to be the world's most successful road race car.

BMW has, so far, won the World Touring Car Championship in each year has been contested. In 1987 Roberto Ravaglia drove a Schnitzer E30 M3 to victory, winning the title by a single point.

2005 saw Andy Priaulx take the drivers title, and BMW take the manufacturers title, this time not with an M3, but the E46 320i. Priaulx's car raced under the banner of BMW Team UK and was run by RBM. Schnitzer Motorsport ran the BMW Team Germany entries, also E46 320i's, driven by Dirk Müller and Jörg Müller. Previous WTCC winner Roberto Ravaglia also ran two cars for the BMW Team Italy/Spain, with Alessandro Zanardi and Antonio García as the drivers.

BMW pilots used the sporty pre-war BMW 328 model as the basis for early post-war efforts in the Formula 2 series, a stepping stone to Formula 1; the 328 occasionally participated in F1 races. BMW ran its own team, but other smaller teams such as Veritas, AFM, Jicey and even East Germany-based EWM also used cars derived from the 328 or its two-litre six-cylinder engine. However, after the death of the initial F2 series in 1955 and its resurrection the following year, BMW's management decided not to participate in expensive open wheel racing. 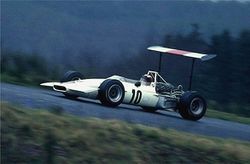 Jo Siffert in the Lola 102-BMW at the Nürburgring.

In 1967, the Formula 2 regulations were changed to allow 1600cc motors, and BMW's new management was more open to the idea of open wheel racing. The BMW M10 block with a radial four valve cylinder head designed by Ludwig Apfelbeck[1] was used for some time. In the 1968 season, the company joined with Lola, using their 100 chassis. BMW sponsored drivers Jo Siffert and Hubert Hahne. For 1969, the team switched to Lola 102s, and used a new development of BMW's 1600cc engine, dubbed the M12. Siffert and Hahne remained; Gerhard Mitter and Dieter Quester shared a third car. Halfway through the season, BMW debuted their own chassis, the 269, at the Hockenheimring. However, Mitter was killed in the 269 during practise for the 1969 German Grand Prix at the Nürburgring where F2 could race along F1 due to the length of that track. As technical failure was suspected, all BMW entries were retired.

For the 1970 F2 season, BMW debuted the 270 chassis, and campaigned with Jo Siffert, Hubert Hahne, Dieter Quester, and Jacky Ickx. However, in 1971, BMW's involvement was pulled back, with the team only supplying engines for Dieter Quester's Eifelland. With a change in the F2 engine regulations to 2000cc production-based engines, BMW went on hiatus for the 1972 season.

When BMW's returned to F2 in 1973, the company again supplied only engines. Although officially backing the March team's effort for drivers Jean-Pierre Beltoise and Jean-Pierre Jarier, they also supplied engines for teams such as Beta Racing (with German Hans Joachim Stuck) and Brian Lewis Racing. From 1973 to the end of Formula 2 in 1984, BMW supplied engines to the championship-winning drivers in 1973, 1974, 1975, 1978, 1979, and 1982.

In 1980, BMW announced their development of a turbocharged motor for the Brabham F1 team. The BMW M12 engine first raced in the 1982 season. The M12/13 engine won at the 1982 Canadian Grand Prix at the hands of Nelson Piquet; Riccardo Patrese was the team's other driver. The following season, BMW supplied engines to the ATS team; the factory-backed Brabham took four victories on its way to Piquet's championship win. Two more victories came in 1984, and BMW added Arrows to its list of teams who received its engines. In 1985, Piquet's Brabham, who was now teamed with Marc Surer, managed only one win.

In 1986, BMW started to supply engines for the new Benetton team, who earned the only win for a BMW engine at the hands of Gerhard Berger. However, the factory-backed effort at Brabham met with little success with the return of Patrese and Derek Warwick. At the end of the 1986 season, BMW announced it would drop out of Formula 1 at the end of the 1987 season.

BMW's M12/13 engine, however, continued to be used, because Megatron bought the rights to the engines for the Arrows team. The Ligier team was also supplied with the engine for the 1987 season. Following the 1988 season, turbocharged motors were banned, and Arrows ended its use of the former BMW engine. 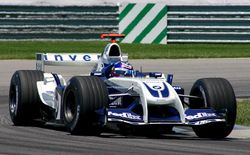 In 1997, BMW announced that it had formed a partnership with Williams Grand Prix Engineering in order to provide V10 engines in 2000. The initial development of this partnership was BMW's sports car effort. Chassis built by Williams powered by a BMW M70 V12 engines were netered by long-time partner team Schnitzer Motorsport. The rather unsuccessful 1998 model was improved, and the efforts culminated in BMW's victory at the 1999 24 Hours of Le Mans with the BMW V12 LMR. Additional success came in the 2000 ALMS series before the cars were retired from racing.

Following the win, the second stage of BMW's partnership with Williams began, with BMW developing the powerful E41 V10 for Formula 1. The new Williams-BMW debuted in the 2000 season, driven by Ralf Schumacher and Jenson Button. In 2001, Schumacher took 3 wins and newcomer Juan Pablo Montoya took his first win. A lone win for Schumacher followed in 2002, but Williams-BMW returned to success in 2003, with two wins each for Schumacher and Montoya. Montoya was the lone winner in 2004.

In 2005, disputes led to a rapid decline in the partnership of BMW and Williams. Constant disagreements over the cause of technical failures in the car led BMW to discontinue development of the P84/5 V10 as the season progressed, leading to no victories for the team's new driver line-up of Mark Webber and Nick Heidfeld. Consequently, the car finished a distant 5th in the constructors' championship.

Wanting a split from their failing relationship with Williams, BMW's executives decided that adding an F1 team to the company's motorsport division, thus removing the necessity for a partner, was the only viable solution. Enticed by Sauber's new multi-million dollar research and development facility, which included an advanced wind tunnel setup, BMW choose to offer a buyout to Peter Sauber rather than scramble to build the facilities themselves. Sauber took the offer, and the buyout went through; the team began racing under the BMW-Sauber F1 name in 2006. The team being split between the Sauber facility at Hinwil, Switzerland and BMW in Munich.

BMW's 2007 season improved on results from the previous year. While the car was still inferior to both the Ferrari and McLaren, it outclassed the rest of the field. BMW scored points in every race, ending the season second in the constructors championship (after McLaren's disqualification) with over 100 points. In 2008 BMW won their first race at the Canadian Grand Prix. The team also achieved several podium finishes like Nick Heidfeld's at the first race of the season in Australia and a second place for Robert Kubica in Monte Carlo.

On the 1990s, the Formula BMW was introduced as feeder series, with small cars powered by BMW K motorcycle engines. Former drivers were e.g. Ralf Schumacher and Nico Rosberg. Formula BMW has since expanded to encompass four championships across three continents. The German series was followed by a south-east Asian championship in 2003, and series in the United Kingdom and the United States were launched the following year. The UK and German championships will be merged into a new pan-European series in 2008.

After 33 years in 1972, a BMW entered the competition for the first time by Schnitzer Motorsport with the BMW 2800CS. In the following years, BMW became a common contender in the 24 Hours of Le Mans, represented by private teams racing BMW race cars in the competition from 1972 till 1989, and from 1993 till 2000 and by teams using BMW engines, most successful the McLaren F1 GTR who won the 24 Hours of Le Mans in 1995 with a BMW S70 6.1L V12 engine.

BMW had various touring and sportscar successes throughout the rest of the 1980s and 1990s following its exit from Formula 1.