The BMW 326 is a relatively rapid medium sized sedan produced by the Bavarian firm between 1936 and 1941,[1] and again briefly after 1945. It had an innovative design and sold well despite its relatively high price. It also had an unusually involved afterlife.

Designed by Fritz Fiedler, and first presented in February at the 1936 Berlin Motor Show, the 326 was offered for sale from May of that year. Featuring a box chassis that could readily be adapted for derivative models, the 326 was the first BMW available with four doors. Also innovative were the torsion bar rear suspension and the hydraulic brake control. The car was offered as a four door sedan and as a two or (more unusually) four door cabriolet. The BMW 327 sports coupé and BMW 328 roadster were based on the 326. The streamlined form of the body contrasted with previous relatively upright BMWs: drag was presumably reduced further by including a fixed cover over the spare wheel at the back.

The four speed gear box was supported by a dry fly-wheel on the bottom ratios and synchromesh between the top two. 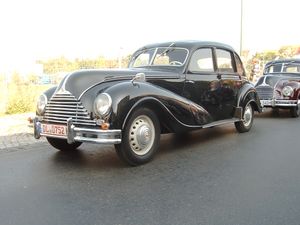 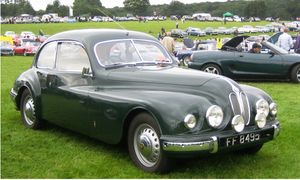 In 1945, Eisenach was occupied by US forces. However, the wartime allies had already agreed that Thuringia would fall within the Soviet occupation zone. The plant that BMW had originally acquired in 1929 was not fully destroyed, and it was possible for returning survivors to assemble a small number of postwar 326s. A modernised version, badged initially as the BMW 340, emerged around 1948. Despite the nomenclature, it was clear that BMW’s Eisenach plant was no longer under the control of BMW: later BMW 340s, still based on the prewar 326, were badged as EMW 340s following a protracted dispute concerning title to the BMW name. It was, perhaps, a tribute to the 326's perceived excellence, together with the skills of the workers who had struggled to revive it, that the Eisenach plant was permitted to produce the BMW design till approximately 1955, long after the Auto Union assembly facilities at nearby Zwickau had been dismantled and removed to Russia as part of the war reparations package.

The Russians were not alone in being impressed by the 326. Detailed plans of the sedan and coupé derivative models were also rescued by the British. Family connections, involving the founder of the Bristol Aeroplane Company and a Frazer-Nash director who had imported to England and adapted BMW designs in the 1930s, led to Bristol. A succession of Bristols cars introduced between 1947 and 1953 were unapologetic developments of the respected BMW design. Ten years after the war's end, Bristol’s 403 produced between 1953 and 1955 retained a BMW style front grill: under the skin the engine had been extensively upgraded, and the Bristol 403 now offered a claimed output of 100 bhp (75 kW). The engine size, at 1971 cc, was unchanged, however.