The first 327, launched in 1937, was a cabriolet. In 1938, this was joined by a fixed head coupé version. The car was shorter and lower than its sedan counterpart, but shared the famous BMW grill and a streamlined form representative of the more progressive designs of the 1930s.

Mechanically, the car utilised the hydraulic brake control, gear box, clutch and front suspension system first seen on the 326, along with the live axle used on the BMW 320 and BMW 328. Also shared with the 326 was the 1971 cc straight 6 power plant, although the 327 boasted a modest power increase to 55 bhp (41 kW). The advertised top speed of 125 km/h (78 mph) constituted a useful performance advantage for the shorter car. 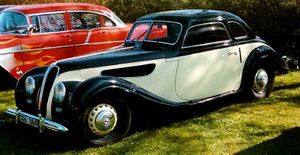 EMW 327, manufactured after the settlement of the name/badge dispute

During the 1930s, Eisenach was the centre of BMW’s automobile manufacturing. In 1945, Eisenach was occupied by United States forces. However, the wartime allies had already agreed that Thuringia would fall within the Soviet occupation zone. BMW's automobile factory in Eisenach was not fully destroyed, and assembly of the 327 resumed. Clear production figures are hard to obtain, but many of the 327s surviving with collectors into the twenty-first century were post-war products. After the war, it became clear that the Soviets would not return the Eisenach factory to BMW. BMW-branded automobiles produced between 1946 and 1951 were therefore being produced outside the control of BMW headquarters in Munich. This cause a protracted dispute concerning title to the BMW brand and other assets, but in 1952 it was determined that Eisenach-produced models such as the 327s should be badged as EMW (Eisenacher Motoren Werke) rather than as BMW (Bayerische Motoren Werke). EMW changed their badge from BMW's blue and white roundel to a red and white roundel.

It is not clear how many of the post war 327s were branded as BMWs and how many as EMWs, but probably more than 500 were produced with one or other of the badges.