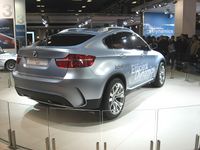 The BMW Concept X6 ActiveHybrid is the concept vehicle of BMWs first full-hybrid vehicle and was revealed at the Internationale Automobil-Ausstellung Frankfurt in September 2007. BMWs first mild-hybrid BMW Concept 7 Series ActiveHybrid was revealed at the Paris Motor Show in October 2008.Both cars will make their market debuts at the end of 2009 [1] and can drive in electrical mode at low speeds.

A defining feature of the BMW Concept X6 ActiveHybrid is its Two-Mode active transmission, an innovative technology that controls the interplay of the electrical motors and the internal combustion engine. The car can operate in two modes: mode 1 delivers high torque when pulling away from a standing start and at low speeds, while mode 2 is suited for higher speeds. The result is that the car always uses the available power resources in the most efficient possible way, whatever speed it is travelling at.