BMW Headquarters (German: BMW-Vierzylinder "BMW four-cylinder"; also BMW Tower) is a Munich landmark, which has been serving as world headquarters for the Bavarian automaker for over 30 years. The building was declared historical in 1999. An extensive remodel commenced in 2004 and was completed in 2006.

The Tower was built between 1968 and 1972 and was ready just in time for 1972 Summer Olympics. Its inauguration followed on 18 May 1973. The building stands 101 m (roughly 331 feet) tall, is located in direct proximity of the Olympic Village and is often mentioned as one of the most notable examples of architecture in Munich. The large cathedral exterior is supposed to mimic the shape of a tire in a race car, with the garage representing the cylinder head. Both buildings were designed by the Austrian architect Karl Schwanzer [1].

The main tower consists of four vertical cylinders standing next to and across from each other. Each cylinder is divided horizontally in its center by a mold in the facade. Notably, these cylinders do not stand on the ground, they are suspended on a central support tower. During the construction, individual floors were assembled on the ground and then elevated. The tower has a diameter of 52.30 meters (roughly 171 feet). The building has 22 occupied floors, two of which are basements and 18 serve as office space. Millions of dollars have been spent on the facility due to high demand in progression. i

During the 1972 Summer Olympics BMW branding was removed from the buildings to prevent undesirable product placement. Interestingly, BMW badging was also removed from the 2002 sedans, which accompanied Olympic marathoners during the competition. The branding was removed again for the building's cameo appearance in the 1975 film Rollerball, replaced by large orange circles, meant to stand for the fictional ruling Energy Corporation of the future.

The BMW Museum is located right next to the tower, while BMW Welt which presents the current cars of BMW and acts as a distribution centre, opened on the opposite side of the road on October 17, 2007. 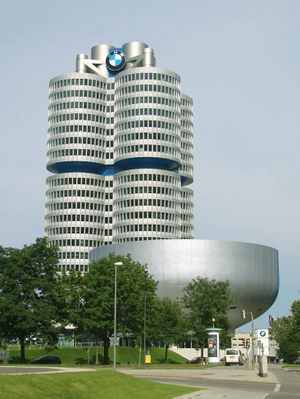 Full elevation of the BMW tower and museum