The BMW M12/13 turbo 1500 cm³ 4-cylinder turbocharged Formula One motor, based on the standard BMW M10 engine introduced in 1961, powered the F1 cars of Brabham, Arrows and Benetton and won the world championship in 1983.

As BMW M12, the engine design since the 1960s became one of the most successful engines in racing. Starting with the European Touring Car Championship, it was also used in Formula 2, expanded to two litre and fitted with four-valve heads, producing over 300 hp. In the Deutsche Rennsport Meisterschaft, a 1400cc variant (with a 1.4 handicap factor equal to 2000cc) was turbocharged by Paul Rosche according to FIA Group 5 rules. At well over 350 hp from the beginning, it rendered the normally aspirated engines in the two liter category useless. After some development, power, driveability and reliability improved, especially in the IMSA car, and BMW began to think about entering F1, where a handicap factor of 2.0 required 1500cc engines. 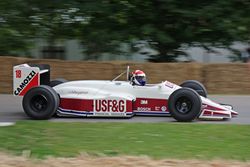 With the BMW badged as Megatron in this A10B chassis, drivers Eddie Cheever (pictured at the 2008 Goodwood Festival of Speed) and Derek Warwick ensured that 1988 was Arrows' most successful year in Formula One, thanks to frequent points finishes.

In the years 1986 and 1987, the version M12/13/1 was tilted sideways by 72° for use in the extremely low Brabham BT55. The design was not successful, probably due to cooling issues in the tight compartement. Anyway, the 1986 engine was said to produce about 1300 hp in qualifying.

As BMW announced to pull out officially at the end of 1986, the Arrows team brokered a deal with support from its primary sponsor, USF&G, to continue the use of the upright BMW engines under the name of its subsidiary Megatron, Inc., founded by long-time F1 aficionado John J. Schmidt, who coined the phrase "Horse racing may have been the sport of kings, but auto racing is the sport of corporations". The engines were serviced by Heini Mader from Switzerland, the former mechanic of Jo Siffert.

Rebadged as Megatron, the BMW engines were used by the Arrows team for the 1987 and 1988 seasons, as well as Ligier for 1987 only.

The Megatron programme ended as a result of a change of Formula 1 engine rules which banned turbocharged motors at the end of 1988. The Arrows team reverted to using 3500 cc Ford-Cosworth V8 normally aspirated powerplants for the 1989 season.