The M20 is an inline-6 piston engine of BMW.

The 12-valve, belt driven SOHC design was introduced in the 1977 BMW 520/6 and 320/6. With displacements ranging from 2.0 to 2.7 liters, it was the "little brother" to the larger BMW M30 engine. It was intended to replace the larger displacement 4-cylinder motors and was born out of BMW's conviction that a small six had more development potential than a large four (i.e. 2 liters+)

Powering the E21 and E30 3-Series, as well as E12, E28 and E34 5 Series cars, it was produced for nearly two decades, with the last examples powering the E30 325i touring built until sometime in 1993. By that time, the newer twin-cam M50 engines with 4 valves per cylinder had already been used in the E36 and E34 for a couple of years.

As the BMW M21, it became a diesel engine that was also available with a turbocharger.

The M20B20 is a 2.0 L M20 engine. Entering production in March 1977 in the E12 520 and later in the E21 320/6, the engine had a bore of 80 mm and a stroke of 66 mm. Fueling was handled by a Solex four-barrel carburettor. These early versions all used the "200" head. When the E30 debuted in 1982, the 2.0 was fitted with Bosch L-Jetronic fuel injection and the revised "731" cylinder head featuring larger intake ports. In 1987, the 2.0 was again revised with the addition of Bosch Motronic engine management and a catalytic converter. Later models also received larger valves. The 2.0 has the distinction of having the longest production run in the M20 series with the last ones rolling off the line in early 1993. 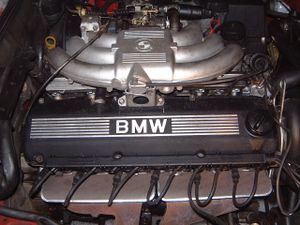 The German version of the M20B25 produced 170 hp (130 kW) with a catalytic converter and 171 without. It featured "885" head with larger ports and valves, 84 mm (3.3 in) bore, and 75 mm (3 in) stroke. Most significantly it had redesigned pistons and combustion chambers for better power, more resistance to detonation and higher thermodynamic efficiency. It was equipped with Bosch Motronic 1.1/1.3 Adaptive fuel injection. With a minor modification that adjusts the idle speed of a cold engine, the 325i fulfills Euro 2 emission requirements in Germany, resulting in a lower tax compared to Euro 1 (as of 2005).

The 2.7 L M20B27 was designed for efficiency (thus the e for the Greek letter eta in 325e). It had an 84 mm (3.3 in) bore and a longer 81 mm (3.2 in) stroke for a total displacement of 2693 cc. The eta engine used the same "200" head casting as the carbureted 2.0 liter and K-jetronic 2.3 as featured in the E21 but only utilizes four camshaft bearings for reduced internal friction. The heads still have seven journals cast into them though and can be drilled to oil a seven bearing cam.

Output was 122 hp (91 kW) at 4250 rpm for all models produced through model year 1987 and 127 hp (95 kW) at 4800 rpm for the final year of production in 1988. Peak torque is Template:Convert/ft.lbf at about 3250 rpm for all years of the eta. This was the first engine BMW built with fuel economy as the top priority. In production it was coupled to either a 2.93:1 differential for the E28 5 series and most E30 3 series models or a 2.79:1 for early E30 3 series cars with manual transmissions. The tall final drive gearing was required to keep the engine in its best operating range at various road speeds. These features did achieve exceptional efficiency, but at the expense of the performance typically associated with the marque.

All eta engines used Bosch Motronic engine management systems that were calibrated for maximum fuel economy. The result was a very conservative spark advance curve and fuel delivery curve. In addition, the Motronic had a built-in rev limiter that engaged at about 4750 rpm. This very low redline was the result of the four bearing cam, soft valve springs, intake manifold and camshaft design. Due to the very low overlap and short duration of the cam and the intake manifold tuning, the motor does not make any power over about 5,000 rpm.

Starting in cars produced from September 1987 for the 1988 model year, the eta cars got a more substantial refresh from the factory. This included the more recent Bosch Motronic version 1.1/1.3 with adaptive idle control and revised circuitry, the "885" head casting with the larger valves, ports and revised combustion chambers, new pistons to fit the 2.7 L stroke with the 2.5 L head, a special one year only intake manifold with even narrower runners that opened up at the flanges to match the larger ports of the new head, a dual exhaust system and a 5300 rpm rev limit. A new 6000 rpm tachometer was also used. Though it only made slightly more power in stock form, it could be easily boosted by installing a 325i cam and springs, a complete 325i intake manifold and throttle and plugging in the 325i engine control unit. Depending on which cam, chip and intake is used, the combination can make over 200 horsepower (150 kW) with the stock compression ratio.

In aftermarket modifications that are inspired by custom versions of Alpina and AC Schnitzer, the long-stroke eta engine block is often combined with a 325i head to a so-called 327i that combines the high low-rev torque of the eta with the top-range power of the 325i.