The BMW M42 is a DOHC 16-valve I4 piston engine first built for the E30 318is 1989 year model. The engine block is based on the BMW M40, used on the 318i, but had distinctive features such as double overhead cams driven by a timing chain, hydraulic valve lifters, and an increased 10:1 compression ratio.

Profile gaskets on M42s built before 1993 are known to fail prematurely.

The M42 is a popular engine swap for 2002s and E21s. It is a relatively inexpensive swap, and produces more usable power than the M10s, while still being lighter, plus utilizing modern EFI and direct-ignition and a much improved valvetrain.

Further, the long-stroke forged crankshaft from the M47 motor coupled with an overbore of +2 mm will make for a 2.1 L Stroker M42. The 86 mm pistons from a European 3.0 L S50 will produce a high compression, stroker M42 when coupled with the M47 crank. The addition of a MAF conversion from an M50 engine and properly setup cams, valvetrain, and tuning will yield potent output from the "lowly" M42. 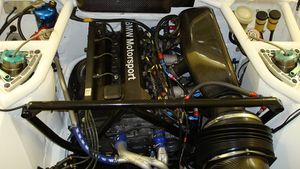 A racing version of the M42 Engine, called the S42 is known. It was used in BMW´s 320 4-door touring car, participating in the German racing series called STW (Super Tourenwagen Cup). It differed by having individual throttle bodies (ITB) for each cylinder and its capacity was enlarged to 1999 cc. It had eight fuel injectors instead of the standard four. Valve cover and airbox were entirely made of carbon fiber. Lubrication was provided by a dry sump system. Compression ratio was increased and a lightweight head was installed.

In the last evolution step the engine puts out an amazing 158hp/ltr. Compared to a modern racing engine it was a big achievement.