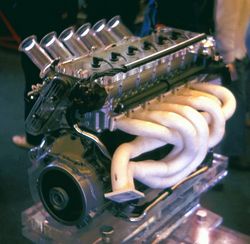 BMW engineers used a 4-valve head and a single-row chain. The cylinder head was made in two parts. The lower part formed the combustion chambers and water jackets, and the upper half contained the camshaft bearings and the bores for the tappets.

Kugelfischer fuel injection was used with individual throttle valves and the distinctive six inlet pipes. The M88 produced 277 bhp in the version built from 1978 to 1981 for the BMW M1.

For the Procar M1's, the M88 was tuned to 470 to 490 bhp. The resulting M88/1 engine had new camshafts, bigger valves, reshaped ports, forged pistons, use of throttle slides (instead of butterfly valves), and improved exhaust.

For Group 5 racing, the engine was pushed to between 850 and 900 bhp by the addition of two turbochargers. This was the M88/2 powerplant.

The S38 was an updated M88/3 and produced in three versions :

The S38 B35 was a revision of M88/3 with dual-row timing chain, reduced compression, catalyst-equipped and fitted with cast iron manifolds rather than equal length "bundle of snakes" headers.