The BMW M Coupe is a Shooting-brake styled high-performance automobile produced by BMW. As of February 2009, two generations of the M Coupe have been manufcatured, one based off of the E36/8 Z3 Coupe and the second off of the E86 Z4 Coupe. Both generations have a "sister" Convertible/Roadster model available. Though a second generation E89 Z4 has been released for the 2009 model year, no official announcements have been made regarding the third iteration of the BMW M Coupe/Roadster.

The car is based on the BMW M Roadster. The semi-trailing arm rear suspension was not modified from the M Roadster. The coupe is 2.7 times stiffer than its convertible counterpart, resulting in superior handling.

The M coupe was developed under the leadership of engineer Burkhard Göschel with the intention of adding increased torsional and structural rigidity to the Z3 roadster’s chassis. The development team had a hard time convincing the Board of Directors to approve the model for production, but it was eventually given the green light as long as it remained cost-effective to produce. To achieve this goal, as many body panels as possible had to be shared with the roadster, thus the doors and everything from the A-pillar forward are interchangeable between the coupe and roadster, as are most interior parts. The Z3 coupe, which mates the M coupe's body with the standard Z3 drivetrain, chassis and cosmetics was approved for production at the same time.

M Coupes built between 1998 and 2000 are fitted with two different engines, depending on the destination market. These engines are the same ones used in the 1996 to 1999 BMW M3.

Due to the unique styling of the M Coupe, dealer sales were slow, and dealerships sidestepped the M Coupe to sell the more practical and more profitable M3 models to performance enthusiasts. The end result is the M Coupes are extremely desirable on the secondary market retaining more of their value than any other BMW since the E30 M3. 2001-2002 M Coupes maintain a premium selling for or higher than the original sticker price 7-8 years later. In fact, a simple search of resale M Coupes will yield little to no results. Obviously, models with lower mileage of 30k or less are extremely rare. The M Coupe is easily destined to become a collectors car due to the uniqueness of its styling. 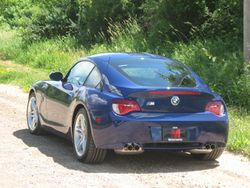 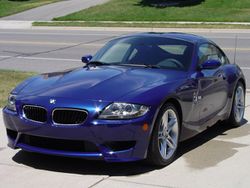 BMW released a limited production, new redesigned, M Coupe based on the Z4. The first cars were delivered right after the North American introduction on May 27, 2006. It has a 3.2 litre inline 6 cylinder engine (same as the M3) and produces a SAE rated 330 hp (250 kW). It shares many components with the Z4 and with the E46 M3. Other components come directly from the M3 CSL like the cross drilled 13.7" floating front rotors, even though it continues to use the same brake pads as the original Z3 M Coupes.

The second-generation E89 Z4 was announced on December 13, 2008,[1] and debuted at the 2009 North American International Auto Show in Detroit the following month. Using a retractable hardtop, the new E89 Z4 replaces the previous roadster and coupe versions for the 2009 model year. As of February 2009, there are no official announcements in regards to the either an M Roadster or M Coupe for the E89.