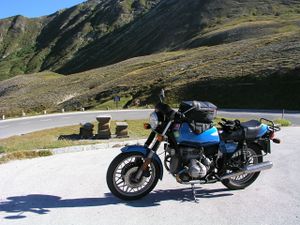 The BMW R65 was a light touring motorcycle introduced by BMW in 1978 to fill a void in BMW’s product line which saw it missing a mid-size motorcycle. The original R65 was made up until 1984 with a smaller frame than larger R series motorcycles, but in 1985 the R65’s engine was put into the new (and larger) R80 frame which featured a single rear shock absorber (mono-shock). Between 1981 and 1984 the R65LS was also made, this R65 variant had a small triangular fairing that was designed by Hans Muth.

The R65 is fitted with a type 248/1 engine, a different version of the well known BMW type 247, known as an airhead. The engine is an 649.6 cc, OHV, two valve per cylinder, air cooled flat-twin, or boxer engine. The R65 weighs 207 kg (455 lb) and has a five speed gearbox connected to a shaft final drive. From 1981 the R65 was fitted with breaker-less electronic ignition. This further improved the already good reliability of the bike.

The R65 features a smaller fuel tank than other larger BMW airheads, with a 22 litres (4.8 imp gal) capacity. 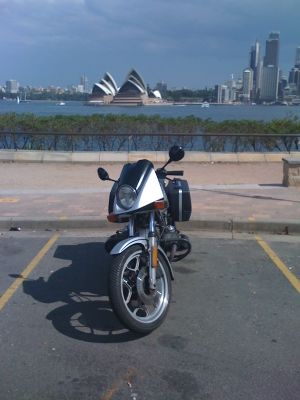 Front view of a 1984 BMW R65LS. The triangular pod fairing can be clearly seen.

In 1982 in an effort to enhance the R65’s image the Hans Muth designed R65LS was introduced. It featured a triangular shaped pod fairing and instrument housing versus the standard naked front end of the R65. Furthermore a different rear seat featured pillion grab handles similar in style to the new K Series bikes. Different model transfers were used and the only colours were red and silver. Much of the chrome work of the R65 was replaced by black painted or black chrome features.

Tools and owner servicing were well thought out. The R65s came standard with a full tool kit. Owner maintenance is standard practice with these machines. Valve gear was adjusted by simple locknut, and timing was taken care of by adjustment of the points' housing. On later models the points were no longer used and a Hall sensor was placed inside the housing, this housing behind the front engine cover is colloquially known as the 'bean can'. Most other maintenance tasks were easily achieved due to easy access to most mechanicals.