BMW Sauber F1 are a Formula One team with bases in Hinwil, Switzerland and Munich, Germany. The team was formed at the end of 2005 as a result of a takeover of the existing Sauber Formula One team by German car manufacturer BMW after their partnership with Williams. The team scored two podium finishes and came fifth in 2006, its first season in Formula One. This was followed by a 2nd place in 2007 after the McLaren team had been excluded from the championship. Polish driver Robert Kubica scored the team its first Grand Prix victory at the 2008 Canadian Grand Prix.

Peter Sauber built his first car in 1970, named the Sauber C1, which competed and won that year's Swiss Hillclimb event.[1] Further hillclimb events soon followed before turning his attention to sports car racing. The team enjoyed some success during the 1970s and 1980s. In 1989, it became the Mercedes-Benz works team, winning the 24 Hours of Le Mans in that year as well as the World Sportscar Championship, which they also won a year later.[2]

The Swiss team entered Formula One in the 1993 season, with engines supplied by Mercedes. The partnership with the German manufacturer lasted until 1994 when the marque switched over to the McLaren team. Instead, the Sauber team switched to Ferrari engines, badged as Petronas, from 1997 to 2005. Sauber never achieved a race win, pole position or fastest lap during its existence in Grand Prix racing although, with drivers Kimi Räikkönen and Nick Heidfeld, the team enjoyed their most successful season in 2001, where they finished fourth in the Constructors' Championship.[2]

BMW first competed in single seater racecars by supplying engines in the Formula Two category before moving up to Formula One with the Brabham team in 1982 which some resulted in a Drivers' Championship crown for Brazilian Nelson Piquet a year later. The manufacturer stayed in F1 until 1987, when they withdrew the rights of their engines were given to Megatron who continued to use them until 1988. However, twelve years later the manufacturer made a reappearance with another British team Williams. Although the partnership picked up a number of results, they could not find a World Title in either Driver or Constructors' Championships. During 2005 BMW ended its engine supply agreement with the Grove based team and bought Sauber.[3] Peter Sauber remained with the team as a consultant.

BMW Sauber put "Thanks Michael" messages on the back of their cars for Michael Schumacher's last Grand Prix in Brazil.

For the 2006 season BMW Sauber signed Nick Heidfeld from Williams to be their lead driver, while 1997 World Champion Jacques Villeneuve had his existing Sauber contract confirmed. Pole Robert Kubica was signed as the team's third driver. The team continued to use Sauber's facilities, mostly for chassis construction and wind tunnel testing, while BMW's headquarters in Munich were responsible for building the new P86 V8 engine.

Former Sauber title sponsor Petronas renewed their contract with the new team, as a simple team sponsor, as did Credit Suisse. For the new season BMW Sauber announced a technical partnership with Intel, claiming that it will eventually lead to technological improvements available on BMW road cars.[4]

The new livery, unveiled in Valencia on 17 January 2006, was the traditional BMW blue and white with a hint of red.

Jacques Villeneuve scored the team's first points with a seventh place finish at the 2006 Malaysian Grand Prix, after Heidfeld retired from fifth with an engine failure late in the race. Over the first two thirds of the season the drivers picked up points with a succession of seventh and eighth place finishes.

The team ran a radical "twin towers" aero enhancement on the front of the car for the race in Magny-Cours, France, which was meant to direct airflow to the rear and thus improve performance.[5] This unconventional add-on was promptly banned by the FIA as it was adjudged to impede the drivers' vision and thus compromise safety.[6]

Heidfeld scored the team's first podium at the 2006 Hungarian Grand Prix from 10th on the grid. Kubica stood in for Villeneuve, BMW stating that Villeneuve couldn't drive due to medical complications following his accident at the German Grand Prix. Kubica finished seventh, although he was later disqualified for an underweight car.[7] After the Hungarian Grand Prix, BMW announced that Kubica would complete the season for the Swiss team, spelling the end of former world champion Villeneuve's F1 career.[8]

Kubica scored BMW Sauber's second podium of the season at the Italian Grand Prix, after running in third place for most of the race and leading briefly during the first round of pit stops. Heidfeld struggled in the race and barely earned a point by finishing eighth. The team's fifth place in the constructor's championship was cemented by Heidfeld's two further points at the 2006 Chinese Grand Prix, and Toyota's early double retirement from the 2006 Brazilian Grand Prix. 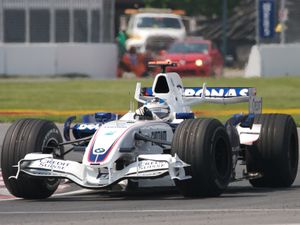 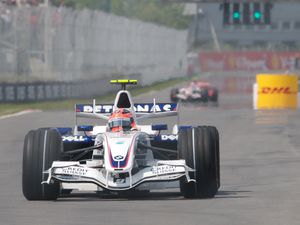 On 19 October 2006, it was announced that Robert Kubica would partner Nick Heidfeld for the 2007 Formula One season with Sebastian Vettel taking the test and reserve driver role. On 21 December, it was announced that Timo Glock had been signed as the team's second test driver. [9] The team launched their 2007 car, the F1.07, on January 16, 2007.[10]

The new car showed promising form throughout the winter testing, topping the times sheets on occasions. However, team principal Mario Theissen declared some reliability concerns before the season's opening race in Melbourne. Robert Kubica duly retired from 4th place mid-race with gearbox trouble, but Nick Heidfeld proved their pace in winter testing was no fluke as he raced to 4th place. Heidfeld has continued this success with two more 4th places in Malaysia and Bahrain respectively. Kubica finished 6th in Bahrain after retiring in Australia and mechanical trouble in Malaysia.

Their performance thus far had been such that many were saying a race win was likely after firmly establishing themselves as the best team behind championship leaders Ferrari and McLaren. Although the perceived performance gap between the two leaders and BMW Sauber was a fair amount, it was still less than that between BMW Sauber and the teams behind them.[11]

The Canadian Grand Prix brought mixed fortunes for the team. While Nick Heidfeld scored a 2nd place finish, Robert Kubica suffered a huge crash that resulted in a long safety car period. The media was initially told Kubica had broken his leg, but it later proved that he had escaped with only a sprained ankle and concussion. [12]

Sebastian Vettel took his place in the US Grand Prix, finishing in 8th place and therefore becoming the youngest driver to score a Formula One World Championship point. After the European GP, however, it was announced by Scuderia Toro Rosso that Vettel would take the second driver seat from Scott Speed. 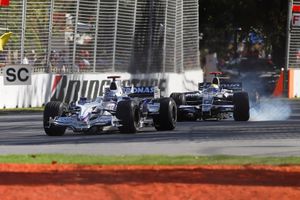 BMW Sauber took a podium finish in the first race of the 2008 season, courtesy of Nick Heidfeld. 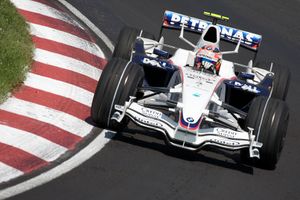 The BMW Sauber team has also introduced a new scheme for the team as a whole, every individual will get "fit for pole",[14] from the boss to the cleaners, meaning that the team will be in optimum fitness for the 2008 season. Team principal, Mario Theissen boldly targeted the young team's first Formula 1 victory for 2008, a bench-mark many outside the organization felt was overly ambitious.

BMW Sauber started the season well with Kubica narrowly missing out on pole after a mistake in his main qualifying lap in Melbourne. He later retired after being hit by Kazuki Nakajima but Heidfeld finished second. Kubica took second in Malaysia, with Heidfeld in 6th setting the fastest lap of the race. The team's points total of 11 was their largest score up to that time. In Bahrain, Kubica scored his and the team's first ever pole position, beating Felipe Massa by just under three hundredths of a second. The team went on to finish 3rd and 4th in the race, equalling their highest round points total and promoting them to first place in the constructors' championship for the first time.

The team also attained a second place finish in the Monaco Grand Prix with Robert Kubica, beating both Ferraris and only trailing the McLaren of Lewis Hamilton by three seconds.

BMW Sauber's first race victory came in the 2008 Canadian Grand Prix, the team achieving a one-two finish with Robert Kubica's first race win and Nick Heidfield taking second place. The victory came after Lewis Hamilton collided with Kimi Räikkönen in the pitlane, ending the race for both drivers. Kubica was on a different refueling strategy from Heidfeld, who also briefly led the race before securing the one-two finish for BMW Sauber in comfortable fashion.

After the team's breakthrough win, development was switched to the 2009 season where new regulations come into play. This greatly annoyed Kubica, (who was leading the championship after the Canadian Grand Prix), as he felt they could have had a realistic chance of taking at least one title. The lack of development was reflected with a drop of form throughout the second half of the season, causing BMW to be outpaced by Renault, Toyota and even Toro Rosso (who started the season as one of the slowest teams) by the end of the season. Despite this, Kubica remained with an outside chance of taking the drivers championship until the Chinese Grand Prix, the 16th round out of 18.

In October the team confirmed that they would stick with Robert Kubica and Nick Heidfeld as their drivers for the 2009 Season.[15] 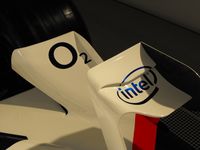 Petronas is the premier partner for BMW Sauber team. Petronas, a previous title sponsor renewed their contract with Sauber when BMW bought the Swiss team. Petronas's Syntium brand is advertised and clearly visible on the livery of the F1.08. In December 2005, Intel Corporation and the BMW Group entered into a comprehensive agreement that includes technology, co-marketing and Intel’s sponsorship of the BMW Sauber F1 Team.

Official partners include Credit Suisse, T-Systems, Dell & Puma AG. Credit Suisse and the BMW Sauber F1 Team have been partners since 2006. The Credit Suisse company logo appears on the cars, helmets, suits, drivers’ caps, pit backdrops and trucks. However Credit Suisse's contract with BMW Sauber was terminated for the 2009 season. Dell supports the BMW Sauber F1 Team with optimised IT equipment at their facilities in Munich and Hinwil and at all race tracks. The logo of the Swiss watch maker Certina is displayed on the team's lollipop used during pitstops, and the team also has the chemical giant DuPont as sponsor.