The BMW X3 is a compact crossover SUV produced by the German automaker BMW. The X3 was the second vehicle to be classified by BMW as a Sports Activity Vehicle (SAV). It is based on the BMW 3-Series E46 automobile platform. The X3 3.0i won the Canadian Car of the Year Best New Sport Utility Vehicle award for 2005.

Along the heels of a successful and ongoing production run of the BMW X5, BMW decided in the early millennium that it wanted to compete with the likes of the Land Rover Freelander and other small SUVs just as the X5 had previously done so well in its respective classes. Thus the X3 (internally known as E83), was born.

What thus emerged was a concept unveiled at the Detroit Auto Show in 2003. Dubbed the xActivity, BMW previewed to the public for the first time what a smaller SAV based on a 3 Series platform would look like. The concept had no windows, for the most part no roof, and a sleek futuristic interior. Only the basic shape of the car would emerge as the BMW X3.

Just as BMW used many parts from the E39 5 Series parts bin in the making of the X5, the same occurred in the X3's development, whereby BMW engineers reused 3 Series parts. In fact, complete sets of parts came straight out of the E46 330xi unchanged in the X3 (e.g. rear suspension).

When the BMW X3 premiered in late 2003, BMW announced that it would be using a new 4 wheel drive system to power it and its bigger brother - The (refreshed) X5. The two key things about xDrive are, first, it being one of the first technologies used to intervene before the driver was ever aware that the car could be unstable, and second, it being transparent (i.e. unknown) to the driver.

Go with the current mpg figures as listed here and bmwusa.com for the 07 x3's it’s mechanically the same, bmw overestimated its figures for 07 that’s why fueleconomy.gov shows them as higher. All are priced standard with a 6spd manual and automatic is extra except for 07 and up. All of the Inline 6 engines are turbine smooth and have been proven by bmw's long history for reliability. The 2.5 engine is adequate enough to move the x3, but the newer ones are more efficient and are more powerful by comparing mpg figures and an addition of a six gear to the automatic. 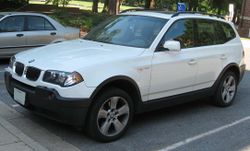 The BMW X3 was initially criticized for its harsh ride, an austere, minimalist interior that relied heavily on obviously plastic components, and limited off-road usage, through its heavily road-biased chassis set-up. Critics also felt the car was overpriced; a basic 2.5i, which lacked cruise control or automatic headlights and had vinyl upholstery, exceeded $30,000 in the U.S. (Vinyl has never been offered in other markets). BMW sought to rectify these complaints in 2005, with various upgrades (see below). The X3 also disappointed some BMW purists by not being assembled at a BMW factory; instead, the car's production was outsourced to Magna Steyr, based in Graz, Austria. However, Magna Steyr has won numerous awards for quality and has been the highest rated car assembly factory in Europe. It has also manufactured - amongst others - European market Chrysler/Jeep products, the 4-Matic Mercedes E Class derivatives, and even Saab 9-3 convertibles.

The automotive press has provided mixed views of the X3. Jeremy Clarkson even said that the X3 was for people who are clinically insane after his road test of it. He also criticized it for its harsh ride, and pointed to the poor off-road ability. He got stuck multiple times because of deep mud and used summer tires. Automotive press generally liked xDrive capability, safe bottom for rough terrain and hill-descent control, but pointed to only real down side against typical off-road cars: missing gear reduction which allows to drive very slow on rough terrain without using clutch (on manual gearbox) or warming up gearbox (automatic gearbox).

The car-like handling, economical entry-level diesels and BMW-typical range of options allowed the X3 to establish itself in the rapidly expanding market for small-medium sized SUV's to the extent that it was market leader in Germany for 3 years, outselling even cheaper models such as the Toyota RAV4. Total worldwide sales in peak year have reached ca. 105.000 units per annum. 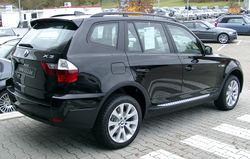 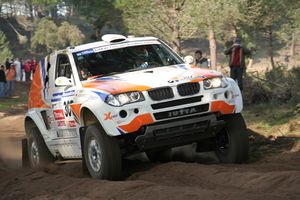 The X3 Cross Country, also known as the X3 CC is an X3 prepared for rally raid competition.[1][2] It features a 2.9 liter, twin turbocharged diesel engine.[3]