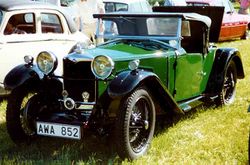 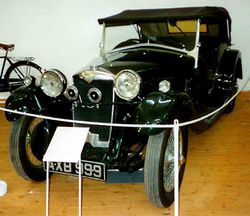 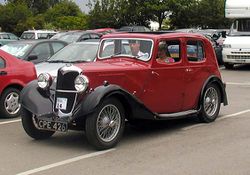 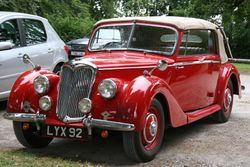 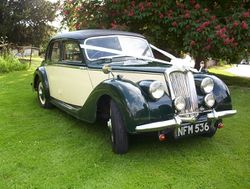 1951 Riley RMA decorated for use as a wedding car 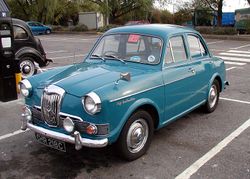 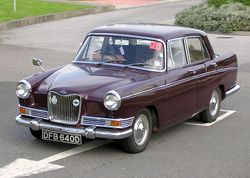 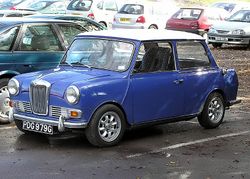 Riley was a British motorcar and bicycle manufacturer from 1890. The company became part of the Nuffield Organisation in 1938 and was later merged into British Leyland. Today, the trademark is owned by BMW.

Riley began as the Bonnick Cycle Company of Coventry, England. In 1890, William Riley Jr. purchased the company and renamed it the Riley Cycle Company. Ultimately, the portfolio included cycle gear maker Sturmey Archer. His teenaged son, Percy, began to dabble in automobiles. He built his first car at 16, in 1898, secretly, because his father did not approve. It featured the first mechanically operated inlet valve. By 1899, Percy Riley moved from producing motorcycles to his first prototype four-wheeled quadricycle. In 1900, Riley sold a single three-wheeled automobile.

In 1903, Percy Riley began the Riley Engine Company, also in Coventry. At first, he simply supplied engines for Riley motorcycles, but the company soon began to focus on four-wheeled automobiles. Their Vee-Twin Tourer prototype, produced in 1905, can be considered the first proper Riley car. The Engine Company expanded the next year, and Riley Cycle halted motorcycle production in 1907 to focus on automobiles. Bicycle production also ceased in 1911.

In 1912, the Riley Cycle Company changed its name to Riley (Coventry) Limited as William Riley focused it on becoming a wheel supplier for the burgeoning motor industry, the detachable wheel having been invented (and patented) by Percy and distributed to over 180 motor manufacturers.

In early 1913, Percy was joined by three of his brothers (Victor, Stanley, and Allan) in a new business focused on manufacturing entire automobiles. This Riley Motor Manufacturing Company was located near Percy's Riley Engine Company. The first new model, the 17/30, was introduced at the London Motor Show that year. Soon afterwards, Stanley Riley founded yet another company, the Nero Engine Company, to produce his own 4-cylinder 10 hp (7.5 kW) car. Riley also began manufacturing aeroplane engines and became a key supplier in Britain's buildup for World War I.

In 1918, after the war, the Riley companies were restructured. Nero joined Riley (Coventry) as the sole producer of automobiles. Riley Motor Manufacturing came under the control of Allan Riley to become Midland Motor Bodies, a coachbuilder for Riley. Riley Engine Company continued under Percy as the engine supplier. At this time, Riley's blue diamond badge, designed by Harry Rush, also appeared. The motto was "As old as the industry, as modern as the hour."

Riley grew rapidly through the 1920s and 1930s. Riley Engine produced 4-, 6-, and 8-cylinder engines, while Midland built more than a dozen different bodies. Riley models at this time included:

The Riley Brooklands was one of the most successful works and privateer racing cars of the late 1920s and early 1930s, particularly in hill climbs and at Le Mans, providing a platform for the success of motorsports' first women racing drivers like Kay Petrie and Dorothy Champney. It was based on Percy Riley's ground-breaking Riley 9 engine, a small capacity, high revving engine, ahead of its time in many respects. It had a hemispherical combustion chamber and overheard valves and has been called the most significant engine development of the 1920s. Its longevity is illustrated by Mike Hawthorn's early racing success after WW2 in pre-war Rileys, in particular his father's Sprite. But by about 1936 the company had overextended, with too many models and too few common parts, and the emergence of Jaguar at Coventry was a direct challenge. Victor Riley had set up a new ultra-luxury concern, Autovia, to produce a V8 saloon and limousine to compete with Rolls-Royce. Meanwhile, Riley Engine Company had been renamed PR Motors (after Percy Riley) to be a high-volume supplier of engines and components. Although the rest of the Riley companies would go on to become part of BMC, PR Motors remained independent. After the death of Percy Riley in 1941, the company began producing transmission components and still exists today as Newage Transmissions. Percy's widow Norah ran the company for many years and was Britain's businesswoman of the year in 1960.

By 1937, Riley began to look to other manufacturers for partnerships. It had withdrawn from works racing after its most successful year, 1934, although it continued to supply engines for the ERA, a voiturette (Formula 2) racing car based on the supercharged 6 cylinder 'White Riley', developed by ERA founder Raymond Mays in the mid-thirties. Rileys (Ulster Imp and Sprite) were also the first significant cars raced by Mike Hawthorn after the war. BMW of Munich, Germany was interested in expanding its range into England. But the Rileys were more interested in a larger British concern, and looked to Triumph Motor Company, also of Coventry, as a natural fit. In February, 1938, all negotiations collapsed as Riley (Coventry) and Autovia went into receivership.

Both companies were purchased by Lord Nuffield for £143,000 and operated by Victor Riley as Riley (Coventry) Successors. It was quickly sold to Nuffield's Morris Motor Company for £1, with the combination coming to be called the Nuffield Organisation.

Nuffield took quick measures to firm up the company. Autovia was no more, with just 35 cars having been produced. Riley refocused on the 4-cylinder market with two engines: A 1.5 L 12 hp engine and the "Big Four", a 2.5 L 16 hp unit (The hp figures are RAC Rating, and bear no relationship to bhp or kW). Only a few bodies were produced, and some components were shared with Morris for economies of scale.

After World War II, the restarted Riley Motors took up the old engines in new models. The RMA used the 1.5 L engine, while the RMB got the Big Four. The RM line of vehicles, sold under the "Magnificent Motoring" tag line, were to be the company's high point. They featured a front independent suspension and steering system inspired by the Citroën Traction Avant.

Victor Riley was removed by Nuffield in 1947, and the Coventry works were shut down as production was consolidated with MG at Abingdon. Nuffield's marques were to be organised in a similar way to those of General Motors: Morris was to be the value line, MG offered performance, and Wolseley was to be the luxury marque. But with the luxury [] marque, and sporty/luxurious Riley also fighting for the top position, the range was crowded and confused.(Vanden Plas deleted as never owned by Nuffield group, but by Austin)

The confusion became critical in 1952 with the merger of Nuffield and Austin as the British Motor Corporation. Now, Riley was positioned between MG and Wolseley and most Riley models were, like those, little more than badge-engineered versions of Austin/Morris designs.

Other BMC Rileys included the Pathfinder with Riley's 2.5 L four which replaced the RM line. With a slightly restyled body and a different engine it was later also sold as the Wolseley 6/90. The Riley lost its distinct (though subtle) differences in 1958 and the 1958 6/90 was available badge engineered as a Riley Two-Point-Six. Although this was the only postwar 6-cylinder Riley, its C-Series engine was actually less-powerful than the Riley Big Four that it replaced. This was to be the last large Riley, with the model dropped in May 1959 and the company refocusing on the under-2 L segment.

Riley and Wolseley were linked in small cars as well. Launched in 1957, the Riley One-Point-Five and Wolseley 1500 were reworked Morris Minors. They shared their exteriors, but the Riley was marketed as the more performance-oriented option.

At the top of the Riley line for April 1959 was the new Riley 4/Sixty-Eight saloon. Again, it was merely a badge-engineered version of other BMC models. This time, it shared with the MG Magnette Mark III and Wolseley 15/60. The car was refreshed, along with its siblings, in 1961 and rebadged the 4/Seventy-Two.

The early 1960s also saw the introduction of the Mini-based Riley Elf. Again, a Wolseley model (the Hornet) was introduced simultaneously. This time, the Riley and Wolseley versions were differentiated visually and identical mechanically.

The final model of the BMC era was the Kestrel 1100/1300, based on the Austin/Morris 1100/1300 saloon. This also had stablemates in Wolseley and MG versions. Following objections from diehard Riley enthusiasts, the Kestrel name was dropped for the last facelift in 1968, the Riley 1300.

Riley production was ended with the 1960s, and the marque went dormant. The last Riley badged car was produced in 1969, a shadow of its engineering heyday. However, the 2000 divestment of the MG Rover Group by BMW brought some renewed attention to the marque. Along with Mini/MINI, BMW retained the rights to Triumph and Riley.

It was revealed in March, 2007 that William Riley, a claimed descendant of the original Riley family (unknown, however, to a grandson of Percy Riley who has read this article), wished to restart Riley production with a version of the MG SV.[2] In May 2007 it was announced that a deal was close to being signed to begin production which would be based in Bispham, Blackpool in a purpose built factory on Bispham Technology Park and close to the former factory of TVR[3].