See also Rolls-Royce Phantom for other models sharing this name

Final assembly, including all body, paint, wood, and leather work, is completed to each customer's individual specification at the Rolls-Royce plant in Goodwood, West Sussex, England. The plant is down the street from the historic Goodwood Motor Racing Circuit.

The plant contains the paint shop, body shop, leather shop, woodworking shop, assembly line, and executive offices under one roof. [1] There are only two robots in the factory. The two robots paint the body; the paint is polished by hand after the robots spray each coat. [2] All other work is done by hand, in keeping with the Rolls-Royce tradition.

It has a 6.75 L, 48-valve, V12 engine that produces 453 bhp (338 kW; 459 PS) and Template:Convert/Nm of torque. The engine is derived from BMW's N73 V12 powerplant. The engine is assembled by BMW. The engine uses direct fuel injection, and is a drive by wire design, using valvetronic technology. The power output is regulated by infinitely varying valve lift by moving the rockers and rocker fulcrums via electric servos, rather than using the throttle body.The throttle body is maintained for fail-safe operation.

The aluminium extrusions that are used to construct the aluminium spaceframe are produced in Norway using hydroelectric power, shaped and machined in Denmark and finally hand-welded in Germany.[3]

An extended wheelbase Phantom was presented in March 2005 at the Geneva Motor Show, which is 250 mm (9.8 in) longer than the standard Phantom. It is currently referred to as the Phantom Extended Wheelbase[4] (or EWB). 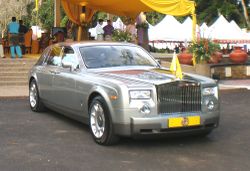 Rolls-Royce Phantom Drophead Coupé is the latest convertible made by Rolls-Royce which debuted at the 2007 North American International Auto Show in Detroit, Michigan on January 7, 2007. The platform is based on the Rolls-Royce Phantom and has styling heavily derived from the 100EX concept car unveiled to celebrate the company's centennial in 2005.